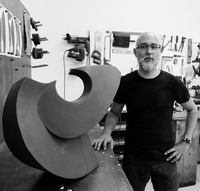 Like many important events in life, in my decision to make sculpture, fortuitousness, or what we believe to be, was important when something is revealed to us through certain clues and intuitions that end up materializing.

In my case, two seemingly unrelated events came together, on the one hand a decoration magazine from the 90s in which you can see some strange headboards that, without realizing it, remained etched in my subconscious. On the other hand, a catalog of the sculpture exhibition that Martí Chirino made at the Reina Sofía Museum in Madrid in the 90s, found accidentally in the area of ​​academic enrollment of the Carlos III University of Madrid.

I left the Carlos III University store, where they practically only sold university material from the courses taught there, leaving the catalog on the shelf. But it stayed in my head for days, until I asked a friend who lived near the university to buy it for me, which he kindly did... the rest has been work and iron.

We use cookies to enable the proper functioning and security of our website, and to offer you the best possible user experience.

You can customize your cookie preferences here. Enable or disable the following categories and save your selection.